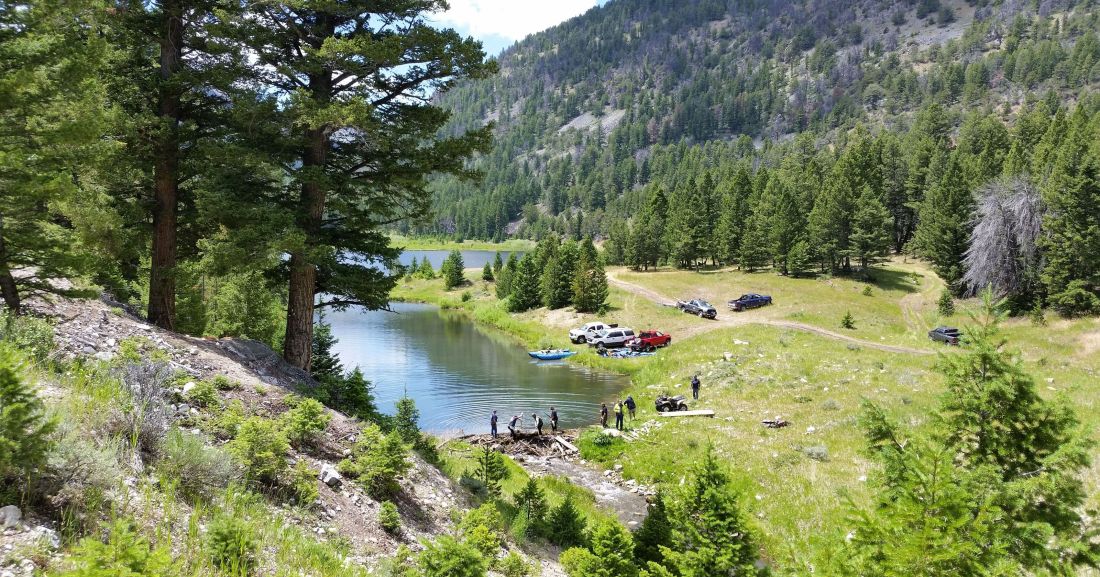 Immediately we are drawn in by the moody introduction. Time-lapse shots of outdoor scenery and meditative tableaus shot with a macro lens focus on tiny dioramas of toy people in wilderness settings. The music is haunting, the tone is dark. This is going to be a somber ride, for sure. The first scene is the actual 911 call from the mother of 2-year-old Deorr Kunz who disappeared on a family camping trip in Idaho in July 2015. This case will remain the core of the film and provide a glimpse into the trauma and chaos that unfolds after a child goes inexplicably missing.

The film then jumps around between various case studies separated by decades of time. Some are re-enacted, but most consist of interviews with family members, news footage and visits to the sites of the disappearances. The film concentrates on a handful of cases in the western United States. Ample camera time is spent lingering on scenic details to build a mood suggesting something ominous and unknown is hiding amongst the beauty of nature. One particularly heart-wrenching case is the 1999 disappearance of Jaryd Atadero in Poudre Canyon, Colorado. His father tearfully recounts the story of how Jared disappeared on a mountain trail yet his pristine shoe was discovered by two hikers four years later. The hikers are interviewed and tell us how there is no way a small child could have hiked up the steep rocky slope where the shoe was spotted. Jaryd’s father touchingly shows us the shredded clothing of his child and even, sadly, his skullcap. The film underscores the fact that these are not just unsolved disappearances but also crimes that leave many secondary victims painfully searching for answers years after the incident.

Surprisingly, nowhere in the 97-minute film does David Paulides himself appear. Along with the voice of George Knapp on a Coast to Coast interview, we only hear his voice. Then it’s back to the Deorr case where we see actual news footage of the search and rescue and interviews with the Idaho Falls TV reporter who covered the case along with a deputy sheriff and a private investigator. With the help of detailed animations, we trace the footsteps of the family on the fateful day as they walk down to the river to look at fish and how the little boy turned back halfway to play with his grandfather at the campsite “because he had candy” before suddenly disappearing under the watch of the old man, who saw nothing.

Anybody familiar with Paulides’ books know that his research depends on data. His six books contain pages and pages of raw data that is difficult to convey in a movie, especially since the devil is in the details, a phrase which happens to the title of book four. So the question is, how do you condense all the specific criteria bullet points, all the varying cases and all the questions into one movie? The answer is that you don’t. Instead of comprehensively covering the entire topic, Paulides chooses to concentrate intensely on a few of the most perplexing cases and dive deep into the emotional states of the family members as they try to piece together what happened and deal with the unexplained disappearance and loss of their child. It’s understandable that he would want to take this angle and drive home the fact that this is a serious mystery fraught with confusion and emotion. But at times, I believe, the film meanders too far astray into the personal drama of the families. In one scene, we sit with a family friend in her junky home as she gets an angry text message about agreeing to be in the film. It’s not that Paulides did not do a good job of keeping us mesmerized by the unscripted human drama, it’s that he left so much out.

For me, the best parts of the film were short interviews with other personalities and researchers. Like Les Stroud of the TV series “Survivorman,” who is one of the few voices in the movie suggesting there could be something “other” at work here. The filmmakers (David Paulides and his son Ben Paulides) interview former U.S. Secretary of the Interior Ken Salazar about keeping records of missing people in national parks. Even a professor of mathematics weighs in on the importance of an open database. And Regis University professor Heidi Streetman is petitioning to get the missing people catalogued. “You have to think beyond the bounds of what’s normal for this. Society is uncomfortable with that,” she remarks. Finally, some speculation!

Another strong point of the film is the investigation into the strange case of Samuel Boehlke. Using Google Earth, we zoom into the exact location near Crater Lake, Oregon where the 8-year-old suddenly went out of his father’s view as he ran over a hillside after they parked at an overlook. He was never seen again. Here the film provides what the books cannot – a visceral feel for the terrain and the bizarre nature of how the bodies are often found so far afield, in locations children could not have possibly traversed by themselves. But then we cut back to the Deorr case and hear from the private investigator who withdrew because the integrity of the parents was called into question. I don’t understand why Paulides focuses so much on the interpersonal squabbling. Substantial amounts of screen time are given to the social media fallout, name-calling and various criticisms from the public regarding details of the case. To me, this seems irrelevant to the overall picture of the phenomenon. Why not concentrate on evidence and patterns, geographic clusters or historical cases proving this is not a modern phenomenon? Instead, we see the personal sadness. But it makes for mesmerizing watching.

The next segment is an interview with a 65-year-old man who went missing and survived as a boy in 1952. While this may seem to be a promising lead into solving the mystery, it’s ultimately disappointing as he remembers nothing of his 24-hour ordeal and lightheartedly shows us the clothing he was wearing when it happened. He offers no clues but serves to remind us that sometimes the disappeared are found safe. Not everyone dies.

Then the film focuses on one case which happened at Camp St. Malo near Estes Park, Colorado in 1958. This gave me a chill because my mother sent me to this camp as a child one summer in the 1980s, so I was quite familiar with the setting. Young Bobby Bizup was fishing on camp grounds and a counselor came to fetch him for dinner, turned his back and the boy disappeared in a matter of minutes. He has never been found. The fact that he was deaf is addressed as a subset of the many cases where people with disabilities are targeted. The original search and rescue team is interviewed and various people give their opinion as to what they think happened. Throughout the film, many people interviewed express the opinion that these are animal attacks. Why Paulides lets this speculation linger in the film and thereby giving it credence is beyond me. He has said many times in interviews and in his books that these cases do not have data consistent with animal attacks. While there are strong opinions in the film countering the animal attack hypothesis, the debate wastes valuable time. Time that could have been spent presenting more of the odd circumstances that make these cases so rich in mystery such as sudden inclement weather, berries, search dogs not finding a scent and victims feeling sick right before a disappearance, to name a few. Paulides does mention the pattern of proximity to boulder fields and national parks, as well as clothes turned inside out and often left neatly on a log. But there is so much more.

Overall, the film is compelling to watch and worthwhile for somebody who is already familiar with his research. I could see this becoming a series as each case could almost be a movie unto itself, or at least episodes in a sequel. But it does not even come close to covering the complexities and intricacies of the books in their entirety. In all honesty, how could it? George Knapp’s comment that this is the “deep end of the paranormal pool” as people are seemingly “plucked out of the sky” points to this being one of the greatest mysteries of our time. We are left in a state of uncomfortable tension. The film offers no answers but presents the facts so that you may draw your own conclusions. I’ve met Paulides a few times and seen him speak at various venues. His reticence to provide answers persists in the film.

The film ends with a photo collage of dozens of missing people and one final statement from Paulides that there are over 1,600 cases and more happening all the time. Oddly, there is very little data on the DVD sleeve itself – no books, no description, not even a mention of the website. This is a missed opportunity. To conclude, the film is high on emotion but low on data. It leaves you scratching your head and wanting to find out more. And in the end, one could argue that if you put the piles of data aside and even if there is only one bizarre disappearance, it’s enough to demand study. The bottom line is that these are people, they have been killed or carried away by some unknown force, and we need to know why.

I am an artist living in Joshua Tree, CA interested in all forms of anomalous phenomena. This blog is my personal site for investigation, discussion and unraveling of the topics of UFOs, other dimensions, cryptozoology, the paranormal, the supernatural, life after life, out of body experiences, earth mysteries, theosophy, psychic phenomena, remote viewing, shamanism, and psychedelics – pretty much all of the non-physical worlds. The unseen realms are closer than you think. LET’S UNFOLD THE CUBE. View all posts by JuliePeasley